There are times when I’m combing through historical information and have the good fortune of uncovering a gem that sparks my imagination. This happened not too long ago when I was researching locations in London and read about the crypt of St. Martin’s le Grand. Since today is Halloween, I thought it was an appropriate day to tell you about this regency era attraction. 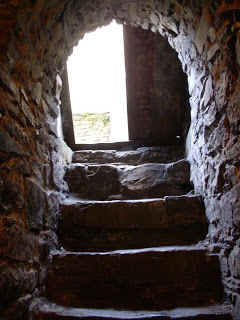 Around the year 700, a collegiate church and sanctuary was founded by Wythred, King of Kent, and dedicated to St. Martin. The epithet le-Grand was added afterwards, because subsequent monarchs granted it extraordinary privileges. William the Conqueror confirmed the endowments and the closing words of his charter states: “If any person whatever shall presume to alter anything hereby granted, let him perish with Judas the traitor.”

Even after the dissolution of the monasteries, the area remained a privileged one, and constituted the precinct known as the Liberty of St. Martin’s-le-Grand. In 1548 St. Martin’s was turned over to King Edward VI and the church was pulled down. A wine tavern and houses were erected in its place, and for a considerable period of time this area also possessed its own prison, bailiff and court. In 1815, Parliament approved this location for a new general post office. When the workmen were clearing the site in 1818, they made an interesting discovery.

This is the account from The Times, dated the 25th of September, 1818:

“As the workmen employed in clearing away the ground in St. Martin’s-le-Grand, which is to form the site of the new post office, were a day or two ago removing the foundations of the old houses which stood in the rear of St. Leonard’s-Fester Lane, they discovered the roofs of some ancient vaults. As soon as the rubbish on the particular spot was removed, three vaults were discovered, each communicating with the other by a narrow passage or gallery: they are built chiefly of large square bricks, intermixed with stone and some flint, the depth about eighteen and the breadth about six or seven. They appear to have been each originally divided into two compartments. In the back of one of the vaults was found a large quantity of human bones, thrown promiscuously together, as if collected from different graves. In one of them is a stone coffin, rather short in length, made in the shape of the ancient coffins, square in the head, and inclining in a tapering form towards the feet; a space is rather rudely shaped for the head of the body to rest upon, and the remains of a skull and some decayed bones are in the cavity. Adjoining, and in the same line with these arches, is a vaulted roof, supported by small and short stone shafts or pillars, from which spring semicircular arches, intersecting each other at equidistant points, and presenting to the eye the skeleton of a structure, at once simple, durable and beautiful. The subdivisions of the intercolumniation [sic] were evidently open when built, and so arranged as to admit a communication with other parts of the building. The floor of these vaults is about 29 feet below the pavement in Newgate-street, the loose ground on the same level bears all the appearance of having once been a cemetery, from the fragments and calcined parts of bones intermixed with soft earth which are observable in the vicinity.”

Other reports state that a Roman coin was found in the crypt and the stone coffin contained a skeleton. After accounts of the discovery ran in the papers, people came from neighboring areas to visit the crypt and for a time it was a tourist attraction.

The General Post Office opened in 1829, and was a grand Neoclassical design by Robert Smirke. From this location mail coaches departed for destinations all over the country. The building was torn down in 1911, and was replaced by a new post office to the west.

Thanks for stopping by my cozy corner of the world. I write books set in the early 19th century and love researching that time period. If you’ve read any of my books, you can search the titles and the research related to that story will pop up. Otherwise, just click on the areas I’m interested in to see some of my past posts. I don’t post on a regular basis, just when I find interesting information to share. So if you don’t want to miss future articles, please click the button blow to subscribe to my blog.

You Can Also Find Me On

©Laurie Benson, 2019. Unauthorized use and/or duplication of this material without the express and written permission from this blog’s author and/or owner is strictly prohibited. Excerpts and links may be used, provided they give full and clear credit to Laurie Benson with appropriate and specific directions to the original content.