SECRET LIVES OF THE TON Series 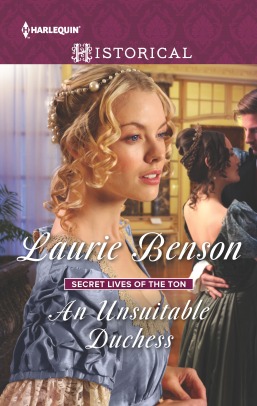 The scandal of the season!

For American Katrina Vandenberg, the rules of London society are stifling. So, when a rare moment of solitude at a particularly tedious ball is interrupted, she’s disappointed…until she lays eyes on a very handsome stranger!

Julian Carlisle, Duke of Lyonsdale, is destined for a dull marriage of convenience, and Katrina couldn’t be further from the docile, blue-blooded bride he needs. An affair would be scandalous, but could there be a way for this highly unsuitable woman to become Julian’s perfect duchess after all?

Pre-order your copy today from one of these fine stores:

An estranged Duke and his Duchess temporarily reconcile to try to conceive a child, but a royal assassination attempt will either lead them to love or separate them forever.

Welcome to my cozy drawing room. I’m Laurie Benson and this is my corner of the world where I share my love of history. Grab a cup of tea, sit back, and stay awhile. If you’ve read any of my books, you can search the titles to see articles which are relevant to those stories. Otherwise, you can click on the areas I’m interested in to see older articles. I don’t post on a regular basis, just when I find interesting information to share. So if you don’t want to miss future articles, please click the follow button to subscribe to this blog. Thanks for stopping by.