My upcoming novel, An Unsuitable Duchess, is a historical romance about the daughter of an American diplomat and an English duke. The story is set in London in 1818. While I was researching what the relationship was like between the United States and Great Britain during that time, I came across information about the Anglo-American Convention of 1818. I’m certain it was covered in one of my history classes in Junior High School, but I had forgotten all about it. Now I can appreciate the importance of this convention that resulted in the Treaty of 1818, which determined, among other things, the 49th parallel as the border between the United States and British North America (Canada). Many historians believe the negotiations surrounding this Treaty were the beginning of congenial relations between the United States and Great Britain.

The convention is referred to by many names: The Convention respecting fisheries, boundary, and the restoration of slaves between the United States and the United Kingdom of Great Britain and Ireland, the London Convention, Anglo-American Convention of 1818, Convention of 1818, and simply the Treaty of 1818. It was held in London in October of 1818 and the Treaty was signed on October 20th. Ratifications took place on January 30, 1819. The opening paragraph of the Treaty explains the purpose and who conducted the negotiations.

The United States of America, and His Majesty The King [George IV of the United Kingdom] of the United Kingdom of Great Britain and Ireland, desirous to cement the good Understanding which happily subsists between them, have, for that purpose, named their respective Plenipotentiaries, that is to say: The President of the United States [James Monroe], on his part, has appointed, Albert Gallatin, Their Envoy Extraordinary and Minister Plenipotentiary to the Court of France; and Richard Rush, Their Envoy Extraordinary and Minister Plenipotentiary to the Court of His Britannic Majesty: And His Majesty has appointed The Right Honorable Frederick John Robinson [1st Viscount Goderich], Treasurer of His Majesty’s Navy, and President of the Committee of Privy Council for Trade and Plantations; and Henry Goulburn Esquire, One of His Majesty’s Under Secretaries of State: Who, after having exchanged their respective Full Powers, found to be in due and proper Form, have agreed to and concluded the following Articles.

The Treaty consisted of six articles. Here’s a breakdown of what each accomplished:

Article 1 – Secured fishing rights off the shores of Newfoundland Labrador for the United States.

Article 2 – Set the boundary between British North America (Canada) and the United States “along the line from the most northwestern point of Lake in the Woods along the 49th parallel of north latitude to the Stony Mountains (Rocky Mountains).” Great Britain also ceded the part of Rupert’s Land the Red River Colony south of the 49th parallel. Fun fact: The border between the United States and Canada is 5,525 miles (8,891 km) long. It is the longest international border in the world. 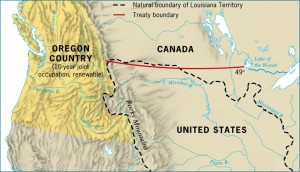 Article 3 – Set equal control of the Oregon Country, which was the Colombia District of the Hudson Bay Company, for ten years. It was agreed that both countries would control the territory and their citizens were guaranteed free navigation through the territory without interference from the other country.

Article 4 – Confirmed regulation of commerce between the two countries for an additional ten years. It also extended the stipulation that vessels of the United States could not dock or hold communication with the Island of St. Helena as long as Napoleon Bonaparte was in residence there.

Article 5 – An agreement was reached that would defer differences over the United States claim in regards to the Treaty of Ghent would be resolved by “some Friendly Sovereign or State to be named for that purpose.” The United States claimed the British had taken some slaves belonging to Americans during the War of 1812. They wanted these slaves returned or compensation given for them.

Article 6 – Stated that ratification would occur within six months after the Treaty was signed.

In reviewing the Treaty of 1818, I also found it interesting to see a map of what the United States looked like at the time.

If you are interested in reading the Treaty of 1818, this link from Yale Law School presents the document in its entirety: http://avalon.law.yale.edu/19th_century/conv1818.asp