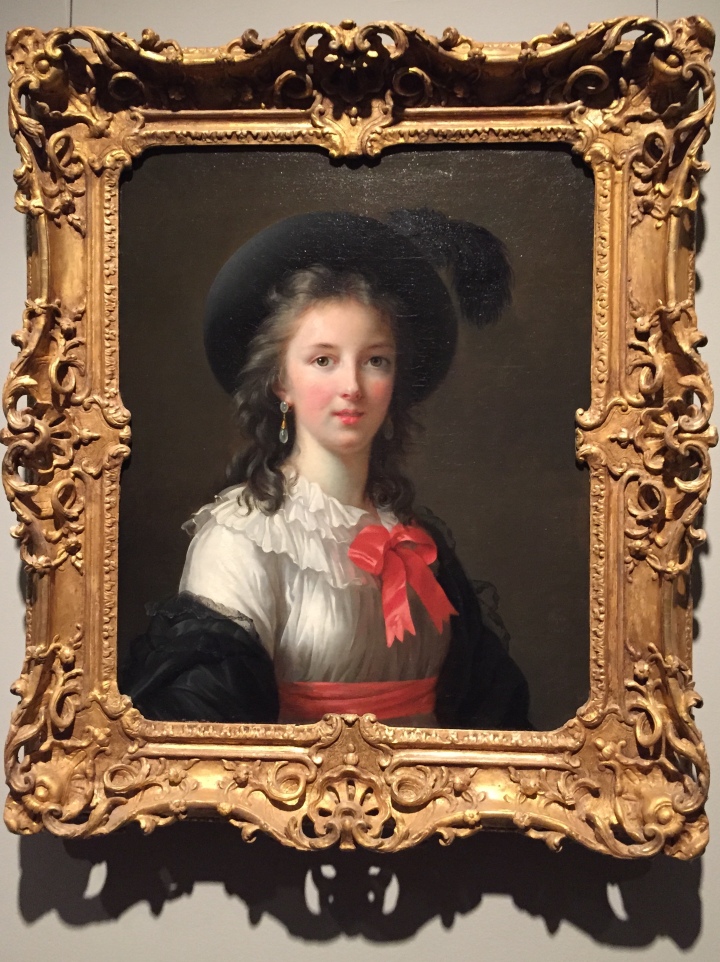 A few days ago I went to see the Vigée Le Brun: Woman Artist in Revolutionary France exhibition at The Metropolitan Museum of Art. Elizabeth Louise Vigée Le Brun (1755-1842) is considered to be one of the finest eighteenth-century French painters and among the most important women artists of all time. She was known for her expressive portraits of French royalty and the aristocracy. She was the same age as her patron, Queen Marie Antoinette, and their association caused Vigée to flee France during the Revolution. According to the exhibition catalog, “Vigée Le Brun exemplifed success and resourcefulness in an age when women were rarely allowed either.”

This exhibition was stunning, and I highly recommend seeing it if you’re in the New York City area. There are restrictions on photographing many of the beautiful paintings, including those of Marie Antoinette, and honestly, the photos I did take do not do justice to Vigée’s fine brushwork. Nevertheless, I thought I’d share a few pieces with you, along with some fun tidbits about the paintings and the women who sat for them.

Blanche Charlotte Marie Felicite de Narbonne-Pelet, the Maréchale-Comtesse de Mailly (1761-1840) was a close friend of Queen Marie Antoinette and was known for her kindness and sense of mischief. Her husband was marshal of France and was guillotined during the French Revolution in 1794. Blanche and their son barely escaped the same fate and went into hiding in Paris. In 1797 the administration of Sarthe returned to her all the marshal’s unsold properties and the money raised from the properties already sold. On Napoleon’s orders, she was obligated to spend her time at the imperial court and to send her seventeen year old son, Adrien, to the Ecole Militaire. When he was wounded during the Russian campaign in 1812, Adrien was saved by Napoleon, who would not allow the last of the Mailly line to perish. Blanche lived to the age of seventy-nine.

Marie Gabrielle de Sinety, Comtesse de Gramont Caderousse (1761-1832) was also a close friend of Queen Marie Antoinette. The comtesse is depicted as a grape harvester in keeping with the Queen’s love of contrived rusticity. Vigée persuaded Marie to forgo powdering her hair for this painting, wishing to show her ebony black locks. This was a radical departure from the powered hair usually worn by women of court and the privileged classes. After one particular sitting, Marie left and went to the theater as she was. According to Vigée, this action set the fashion of unpowered hair, which became wide-spread.

The Comtesse Du Barry de Cérés was born Anne Marie Thérèse de Rabaudy Montoussin (1759-1834) and she married the comte Jean Baptiste Du Barry de Cérés, thirty-six years her senior when she was eighteen. According to Vigée, Anne had a “charming and sweet face though you could see something false about her eyes.” That falseness was evident when she diverted public attention away from her liaison with Charles Alexandre de Calonne, controller general of finances, by spreading rumors that it was Vigée Le Brun who was engaged in an affair with the man. This rumor hurt Vigée’s reputation.

This portrait was commissioned by the Marquise de Rougé, who appears in the center of the painting with her two sons, Alexis and Adrien. By the time this portrait was painted she had been widowed about four years. Her husband, Colonel Marquis de Rouge died while returning from a distinguished military career. The other woman in the painting is her dear friend The Marquise de Pezay, who was also a widow. This is one of my favorite paintings in the exhibition. I love the iridescent gown of the Marquise de Pezay, and there is a sweetness in the way the boys are snuggling up with their mother. But I think the aspect of the painting that touched me the most was that it includes two girlfriends. It is a sweet tribute to what must have been a very close friendship.

When Vigée arrived in Naples in 1790 she met Ekaterina Vasilievna, née Engelhardt (1761-1829) at dinner. Ekaterina was the wife of the Russian plenipotentiary in Naples. Vigée recalled her as “sweet and pretty as an angel. I remember her telling me that in order to go to sleep she had a slave under her bed who told her the same story every night. She was utterly idle all day, had no education, and her conversation was quite empty. But in spite of all that, thanks to her lovely face and her angelic sweetness, she had an incomparable charm.” Ekaterina is believed to be staring at a miniature of her husband in this portrait.

This is my favorite story about any of the paintings in this exhibition. When Vigée was in Vienna, Prince Alois I von und zu Liechtenstein (1759-1805) requested two enormous paintings. One of his wife Princess Karoline Felicitas Engelberte von und zu Liechtenstein (1768-1831) and the other of her sister. Vigée decided to paint the princesss of Liechtenstein as Iris. This is Vigée’s recounting of this painting in her Souvenirs: “That young princess was very shapely; her pretty face had a sweet and heavenly expression, which gave me the idea to represent her as Iris. She was painted full-length, soaring into the air. Her scarf, in the colors of the rainbow, fluttered about her. You can well imagine that I painted her barefoot; but when that painting was placed in the prince’s gallery, her husband and the heads of the family were very scandalized to see the princess without shoes, and the prince told me he had a pretty pair put under the portrait, telling the grandparents that the shoes had just slipped out and fallen onto the floor.” At the time, the prince was thirty-four and the princess was twenty-five. Prince Alois liked the painting so much, he also commissioned the present bust-length version that is displayed in this exhibition. I found it sad the cheeky prince died at the young age of forty-six.

After receiving a number of commissions from Russians in Vienna, Vigée decided to travel on to St. Petersburg in 1795. This portrait of Countess Ekaterina Vasilievna Skavronskaya was painted after Ekaterina had been widowed for three years. It is considered a boudoir painting due to the relaxed nature of her dress and is believed to have been painted for her younger sister, Tatyana. Providing a seat and something to lean on were comforts that Vigée liked to give her sitters.

Anna Ivanovna (1774-1825) was married to Count Nokolai Alexandrovich Tolstoy, a renowned collector of books and prints and an intimate friend of the future Tzar Alexander I. Anna was well known for her tall stature and her friends nicknamed her “La Longue”. She commissioned this portrait by Vigée in keeping with her mother’s preference for women artists. The chemise dress is reminiscent of the attire Queen Marie Antoinette favored in the 1780s.

When Vigée left St. Petersburg she traveled to Berlin, capital of the Prussian kingdom. Three days later she was summoned by Queen Luise (1776-1810) to Potsdam Palace to paint her portrait. The queen treated Vigée more like a hostess than a patron. She offered rooms to Vigée at the castle, but the artist declined preferring to rent a room in a modest hotel. The queen sent her coffee, provided her with a loge at the theater, invited her to visit Pfaueninsel and its castle in a carriage supplied by the court, and gave Vigée two bracelets that the artist had admired. Sadly, the thoughtful queen would die at the young age of thirty-four.

Tatyana Borisovna Potemkina (1797-1869) suffered from lung disease and, accompanied by her husband, left Russia to seek medical treatment abroad. While they were in Paris she posed for Vigée. The painting suggests the sitter’s reserve and withdrawn personality.

The Duchesse de Berry is a woman who I keep running across in my research and in a few of the antiques I’ve purchased. In fact, I’ve written a number of blog posts that include her. Marie-Carolina Ferdinanda Luisa di Napoli e di Sicilia, princesse de Bourbon-Naples (1798-1870) was married at seventeen to the second son of the future Charles X, Charles-Ferdinand d’Artois, duc de Berry. Destined for the throne, he was assassinated two years after their marriage by a fanatic bent on eliminating the house of Bourbon. Shortly after her husband’s death, the duchesse gave birth to their son, Henri, duc de Bordeaux, later comte de Chambord. She was a fashion trend-setter of her day and after her husband’s death, she devoted the rest of her life to trying to restore the Bourbons to the French throne, in the form of her son.

Viewing art is such an individual experience, even if we are standing in a gallery surrounded by other people. When we look at a painting, we bring our life experiences with us and see the work through our own unique perspective. I’ve told you about some of my favorite paintings from this exhibition. I’d love to know what your favorite is. Make a note in the comments section and let me know.