I’m writing the third book in my Secrets of the Ton trilogy and my hero, the Earl of Hartwick, is a man who appreciates fine brandy. I love creating personal details about my characters and wanted to include the name of Hart’s favorite brandy in my story. When I started my research, I thought I’d simply get the name of a notable brandy from 1819. What I discovered, gave me insight into the cognac I drink today and I thought you might find it interesting as well.

First let me explain the difference between the terms brandy and cognac. Brandy is made by distilling wine and aging it in barrels. Cognac is brandy which comes from the Cognac region in France.

During the Regency era, the finest brandy was produced during 1811 in France. The interesting thing is, still to this day, that vintage is considered to be one of the greatest in history. And the reason behind it is tied to a comet.

In March of 1811, the Flaugergues comet began its trek across the sky in the Northern Hemisphere. Although the comet was visible to astronomers for 17 months, during September and October of  that year, it was visible to the naked eye. Accounts of the time describe the comet as illuminating the night sky and at one point it exceeded the diameter of the sun.

It’s believed the presence of the comet contributed to optimal growing conditions, particularly in France. The long hot summer and warm dry autumn of that year led to an abundant harvest of perfectly ripe grapes. People soon realized that the cognac, wine, and champagne of this vintage were exceptional. Even today, you can find bottles of cognac in your local liquor store that have stars on the labels. This isn’t a ranking. The stars are there as a tribute to the 1811 vintage, known as “The Comet Vintage”.

If you’re familiar with Courvoisier cognac, you’re probably aware it’s known as “Le Cognac de Napoleon”. According to the company’s website, not long after they were founded in 1809, the reputation of their cognac grew quickly among brandy connoisseurs and Napoleon visited their warehouse in Bercy to try it. He started giving a ration of cognac to his artillery companies to lift their morale during the Napoleonic Wars. When he was exiled to St. Helena, legend has it that he chose several casks of Courvoisier cognac to take with him as one of the luxury items he was granted by the British. The British officers on board the HMS Northumberland, who were tasked with transporting Napoleon, appreciated the cognac their prisoner shared with them and referred to it as “the brandy of Napoleon”.

And in case you’re curious which brandy the Earl of Hartwick favors in my upcoming book An Unexpected Countess, it’s an 1811 Croizet B. Léon cognac, which currently is selling for €25,000 for one bottle. 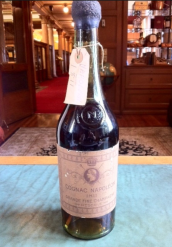 The Daily Cognac: 1811 The Comet Vintage