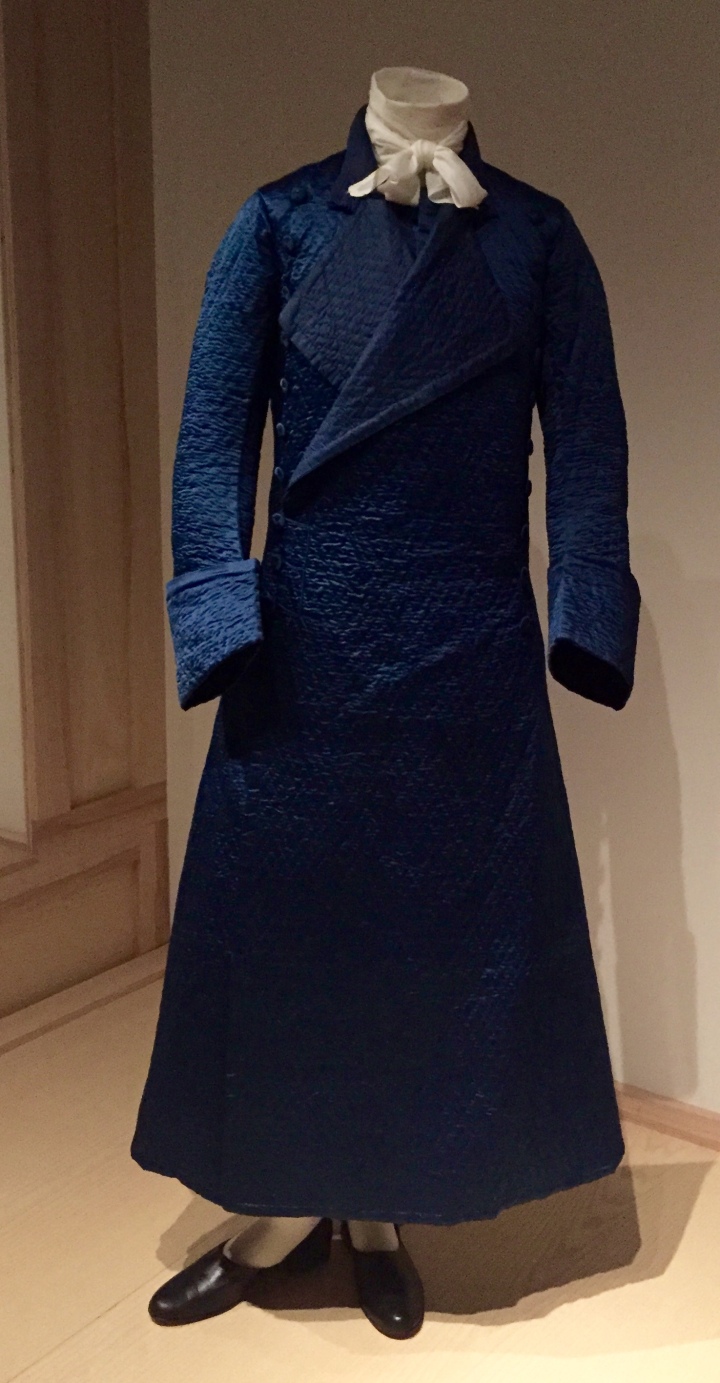 When I was writing An Uncommon Duke, I had fun playing with a character quirk of my hero, Gabriel Pearce the Duke of Winterbourne. Gabriel heads up an undercover group of operatives that protect King George and the Prince Regent. His work is dangerous and much of what occurs protecting the crown is out of his control. One of the things he can control is his wardrobe and because of that, Gabriel is a bit obsessed with his clothes. Someone referred to him as the Regency version of a sharp dressed man. Researching men’s fashion in the Regency era was fun and I spent many hours on Pinterest and museum sites looking for inspiration for Gabriel’s wardrobe.

Recently I had the opportunity to see the fashion exhibition at the Metropolitan Museum of Art entitled Masterwork: Unpacking Fashion. I knew I’d enjoy taking a look back at 300 years of fashion history and I’d learn some new things. I was disappointed to find it did not include men’s fashion from the Regency era, however it did include 18th century men’s fashion and some of those styles did carry over into the Regency era. The collection highlighted garments from France and Great Britian reflecting the roles these nations played as centers of textile production and as styles leaders in Europe and America. Fashions from the 18th century are from an era shaped by political and industrial revolutions as well as expanding global trade. The examples given in this exhibition reflected that.

So sit back and enjoy this peek at what fashionable men wore in the 18th century. 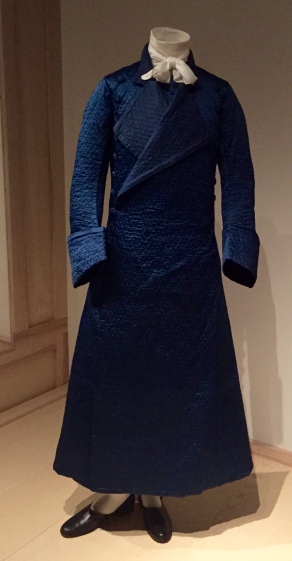 This banyan was made in England in 1760-1770 and is made of blue diamond-quilted silk satin.

Beginning in the 18th century, British gentlemen wore loose, informal gowns in the privacy of their homes as a comfortable alternative to the stiff and physically restrictive suits they wore in public. These gowns were made of imported materials from the European East India companies and went by various names such nightgowns, morning gowns, India gowns, and banyans. This banyan is made of Chinese silk that was quilted for warmth and has a fitted cut which became popular in the mid-18th century. The fitted banyan combined Persian, Turkish, and Indian influences but followed the silhouette of contemporary European coats, making them well suited to wear informally when receiving guests at home. The banyan was an essential garment for fashionable men and suggested sophisticated, worldly masculinity. This banyan was made in England in 1760-1770, and is made of blue diamond-quilted silk satin. 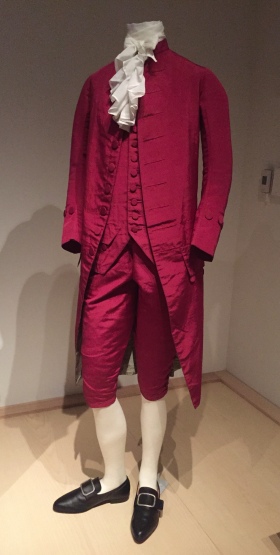 The suit above was made of red wool-silk poplin in England between 1770 and 1780. It is an example of the relative simplicity in appearance of 18th century English menswear, which influenced fashionable men’s style throughout Europe in the latter half of the century. The plain style was an alternative to the elaborately embroidered and ornately patterned men’s wear in France. This reserved style of dress became linked with broader political values and greater personal liberty that French philosophers, such as Voltaire, associated with England. Just like the banyan above, this garment has a slim silhouette which was fashionable in the 1770s. English tailors were expert in making these tailcoats appear simple, while actually doing an excellent job emphasizing a man’s physique. The fine details of this coat include a gracefully curved front, narrow sleeves, and side seams that arch toward the center of the back, creating the impression of a tapered waistline. While the suit appears simple, the color shows a lingering taste for bold color.

The tailcoat above is French and was made in the 1790s from dark brown, gray, and blue warp-printed plain weave silk with green ombré silk satin stripes. With its high turned down collar, narrow back and wide lapels, it’s typical of the exaggerated silhouette that was fashionable in post-revolutionary France. The museum curators placed it alongside the redingote (the dress) to show the harmony between men’s and women’s fashions during this period that extended to fabric as well as cut. For men, stripes were a decorative substitute for the ornate embroidery of earlier suits. It was interesting to find out that in centuries previous to the 18th, stripes had been associated with the clothing of socially marginalized groups. I think it’s worth noting that even though embroidered suits went out of fashion, embroidery on waistcoats was still popular. 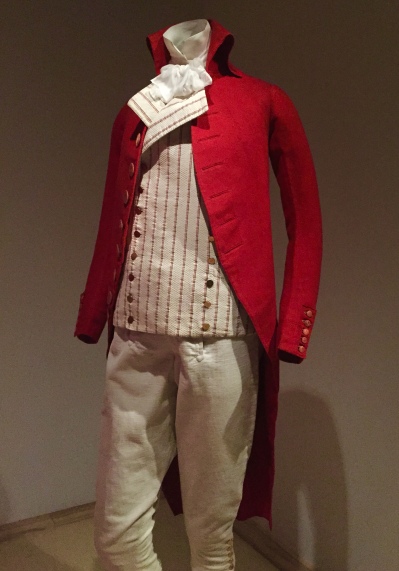 The exhibition also included a suit of a French Incroyable (Incredible) that made me smile. The Incroyables were rakish men who lived in France following the French Revolution. They stood out among fashionable men of the time due to their tightly fitted clothing which took on extreme proportions. This coat was made in France of red wool broadcloth between 1787 and 1792, and predates the most exaggerated styles embraced by the Incryoyables in the late 1790s. As the decade progressed, the cut of their clothing became even tighter than this. The high, turned-down collar, narrow sleeves, and sharply curved coat front of this coat still manages to create the impression of an elongated figure. I think the high cut of the top of the waistcoat also helps.

The banyan featured in this exhibition is close to the one I put Gabriel in in An Uncommon Duke. It seems to be the perfect thing for a sharp dressed man to wear while lounging in the doorway of his wife’s bedchamber.