Researching locations to use in my novels in one of my favorite things to do when I’m preparing to write a book. An Unexpected Countess, my upcoming book, is a historical romance that pits my hero and heroine against each other in a race to find a piece of the missing French Crown Jewels. Before I wrote the book, I traveled to London to search out interesting locations to use in that story and became enchanted with another of its picturesque squares.

St. James’s Square was the first of London’s west end squares and was conceived and created by Henry Jermyn, Earl of St. Albans when he was granted a freehold by the Crown in 1665. The Earl wanted to build thirteen or fourteen houses, “fit for ye dwellings of Noblemen and other persons of quality”. By the time of the construction, his plan was enlarged to include twenty-two houses to be built on the north, east, and west sides of the square with an large unpaved area in the center. The south side wasn’t included in the Earl’s design since there were properties already there that fronted Pall Mall.

By 1726, the south side of the square was an eyesore. It included a 30-foot long coach builder’s shed, and piles of garbage and cinders littered the area. Needless to say, the genteel residence of the square weren’t happy and petitioned the House of Commons to address the situation. An Act of Parliament was passed that year which appointed Trustees from the properties fronting the north, east and west ends of the Square to clean, adorn, and beautify it. That Trust still exists today.

A year after the Trust was formed, the Square was paved and Charles Brideman was commissioned to design an aesthetically pleasing central open area. He created an octagonal space that included a round water basin in the center that spanned 150 feet in diameter and was 4 feet deep. He enclosed the space with outer railings and made walkways extending straight from the corners of the railings to the basin.

In 1799 the octagonal was changed to a circle, and in 1807 an equestrian statue of William III was set in the center of the water basin. The basin was demolished in 1854, but the statue continues to dominate the center of the park today.

By 1817, the Trustees wanted to revamp the Square and called in John Nash to redesign it. Nash kept the above-mentioned basin but surrounded it with curving walks, added shrubbery around the outside perimeter, designed a summer house beside the south entrance, and added additional serpentine paths through rich landscaped gardens. He enclosed the Square with handsome cast iron railings set on a Portland stone base. Nash’s plan was implemented that year and completed in 1818. 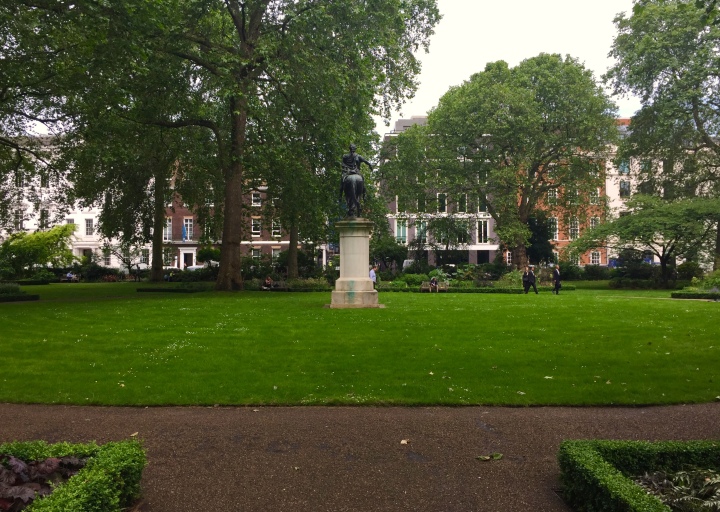 Today, seventeen of the houses that overlook St. James’s Square are “listed” properties of special importance. The Square has had some notable residents. Here are a few and where they lived:

#4 was built in 1728. This was the home of the Astor family for thirty years. It is now home to The In and Out, Naval and Military Club and is the only remaining building that has a mews at the rear.

#9 & 10 were both built in 1736 and today they’re combined to form Chatham House, which is the office of the Royal Institute of International Affairs. No. 9 was originally occupied by the Hoare banking family until 1836. And, No. 10 was the home to both William Pitt, the 1st Earl of Chatham and Prime Minister of England (1708-1778), and Prime Minister William Ewart Gladstone (1809-1889).

#15 was built in 1766 and designed by architect James Stuart. This was the London residence of the Earl of Lichfield for fifty years. 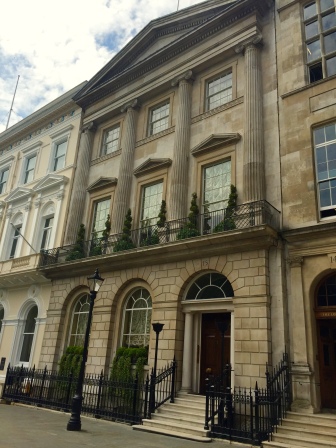 #16 is an important building for those of you who love the Regency era. On the evening of June 21st, 1815 a soiree was being held in this home hosted by Mrs. Edmund Boehm that included the Prince Regent, later George IV. The festivities were interrupted when the Honorable Major Henry Percy, 14th Light Dragoons, an aide de camp to the Duke of Wellington, knocked on the door. He traveled from Brussels with a dispatch from Wellington that informed the Prince Regent of the victory at Waterloo and laid two French Imperial Eagles that were captured on the battlefield at the feet of the Prince. Imagine being able to boast that news of this important victory was announced first in your home.

#20 was built in 1774 and designed by architect Robert Adam. Her Majesty Queen Elizabeth, the Queen Mother lived here from from 1906 to 1920.

#32 was built in 1818 and for much of the 19th century this was the residence of the Bishops of London.

To find out how I used St. James’s Square in An Unexpected Countess, order your copy today.

Sarah Forrester, an American diplomat’s daughter, must locate the fabled Sancy diamond or her family will be ruined by a mysterious blackmailer. But the Earl of Hartwick has also been tasked by the Prince Regent to find the diamond. Little does he know the feisty young lady he met on a rooftop is his competition. As they each follow the clues hidden in a bracelet, Sarah and Hart realize they will have to work as a team. Being together may be as dangerous to their hearts as the hunt is to their lives…and finding the jewel is only the beginning.