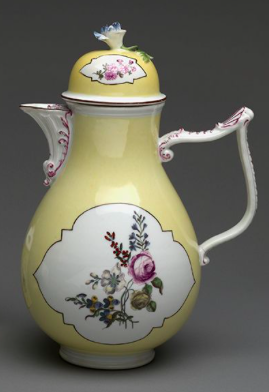 If you’ve read my books, you know that most of my heroines prefer to drink chocolate the first thing in the morning instead of tea. Drinking chocolate was introduced to Europe by the Spanish and by the late seventeenth century it was a popular morning beverage. It was served warm, like it is today, however it was not as sweet as the hot chocolate we’re accustomed to. The painting above shows a servant girl presenting a cup of chocolate and a glass of water to a young French noblewoman as part of her breakfast.

One of my favorite parts of writing historical fiction is picturing how things looked two hundred years ago. Going antique hunting and visiting museums plays a big part in helping me step back in time. Since there were special pots designed for fixing hot chocolate, I thought I’d give you a glimpse at what they looked like.

A chocolate pot is taller than a tea pot and looks similar to a coffee pot. You can tell the difference between a coffee pot and a chocolate pot by the finial. A chocolate pot’s finial is either removable or it slides to the side. Chocolate needed to be stirred often in order to prevent it from settling to the bottom of the pot. This removable finial would allow you to stir the chocolate with a long swizzle stick without having to open the lid which would cause the heat to escape.

Some chocolate pots had straight handles, like the one in the photo above. Chocolate was an expensive commodity in the 17th and 18th centuries and associated with expensive things, so the pots were either made of silver or porcelain. You can usually tell something about the location of where the pot was made by what it was made out of. In Austria and Germany, the courts favored porcelain pots. In France the pots were either made of porcelain or silver. The American colonists began their love affair with drinking chocolate in the mid 17th century when England acquired Jamaica in 1655, an area where chocolate was grown. Chocolate pots weren’t produced in the colonies though, and pots made overseas were sold in the colonies at a very high price.

The chocolate pot above was made out of silver and amaranth wood by Joseph-Theodore Van Cauwenbergh in 1774 in Paris, France. The records at the Walters Art Museum show that this pot was owned by John Alfonse Walter who lived in Haiti. John and his wife Susan brought this pot with them when they moved from Haiti to Baltimore, Maryland sometime after 1793.

In 1828, Coenraad Johannes Van Houton invented the cocoa press, which removed the fat from cacao beans and turned the beans into cocoa powder, the basis for most hot chocolate produced today. Chocolate prices fell, and soon chocolate became a luxury most people could afford. With the development of cocoa powder the design of the chocolate pot changed. Chocolate powder eliminated the need for constant stirring of the pot, therefore pots made after 1828 have their finials permanently affixed to the lid of the pot.

Drinking chocolate was so popular that not only was it depicted in paintings, but also in decorative items like this lovely Meissen porcelain couple created by Johann Joachim Kandler in 1775 that are sharing a cup of chocolate.

In An Unexpected Countess my heroine, Sarah, enjoys a cup of chocolate with her breakfast. 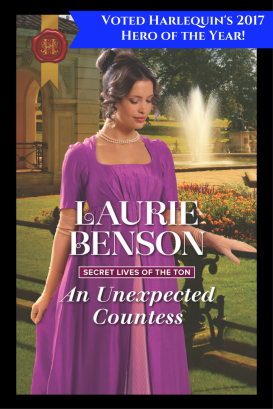 Sarah Forrester is an American diplomat’s daughter who must locate the fabled Sancy Diamond or her family will be ruined by a mysterious blackmailer. But the Earl of Hartwick has also been tasked by the Prince Regent with finding the diamond. Little does he know that the feisty woman he meets on a roof top is his competition. As they each follow the clues hidden in a bracelet, Sarah and Hart realize they will have to work as a team. Being together may be as dangerous to their hearts as the hunt is to their lives…and finding the jewel is only the beginning.

Available in print and ebook. Click on the links below to pick up a copy of this Regency romance today.

Welcome to my cozy drawing room. I’m Laurie Benson and this is my corner of the world where I share my love of history. Grab a cup of tea, sit back, and stay awhile. If you’ve read any of my books, you can search the titles to see articles which are relevant to those stories. Otherwise, you can click on the areas I’m interested in to see older articles. I don’t post on a regular basis, just when I find interesting information to share. So if you don’t want to miss future articles, please click the follow button to subscribe to this blog. Thanks for stopping by.